New Album - I Dream of Water - Nominated for OffBeat’s 2019 Best Of The Beat Awards!

Check out the latest music and upcoming events!

New Album: I Dream oF Water

I Dream of Water, a collection of original songs written by Katy Hobgood Ray and Dave Ray, is now available on the Out Of The Past Label. Inspired by events in coastal regions and cities along the great rivers of the USA, the album is both social commentary and personal reflection on how increasingly intense storms and rising waters are affecting daily life, futures, hopes, and dreams.

Produced by Greg Spradlin and recorded at Fellowship Hall Sound in Little Rock and Marigny Studios in New Orleans, the album incorporates elements from the Delta blues, gospel, country, and jazz. ORDER THE ALBUM 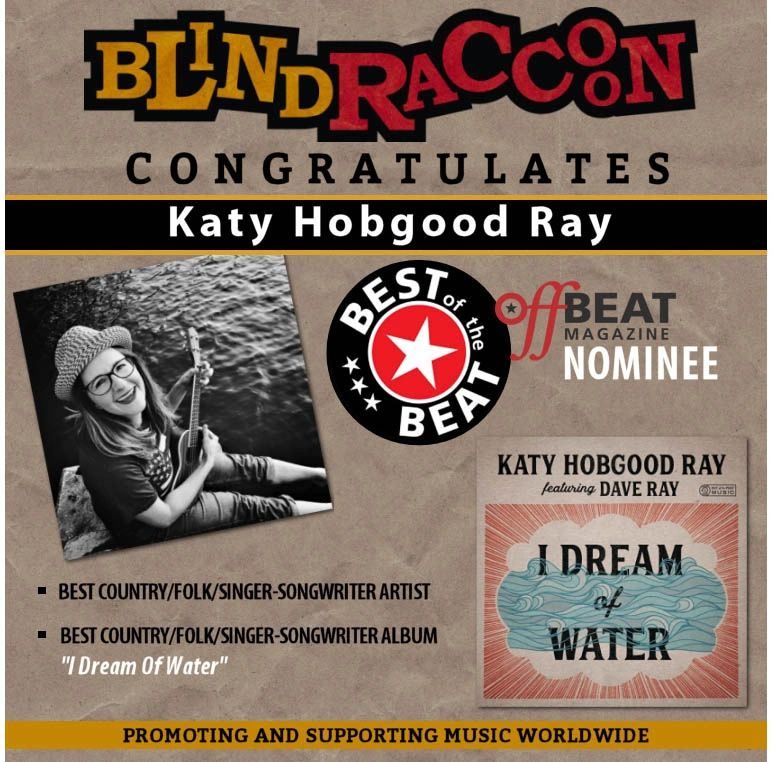 Nominated for the Best of the Beat Awards!

Katy has been nominated for two "2019 Best of the Beat" Awards from OffBeat Magazine!

Dave and Katy met in 2001 at a songwriter’s night in Shreveport, Louisiana—their hometown. Both write songs in the Americana/folk rock/country vein. In 2003, the couple moved to New Orleans,  and over the years they've continued to perform at coffeeshops and small venues, collaborating in various bands.

Dave and Katy are members of Friends of Leadbelly, a group of musicians dedicated to promoting the legacy of north Louisiana songwriter Huddie Ledbetter. And over the last few years, Katy has become known for her work in children's music with Confetti Park, and has performed at numerous festivals including French Quarter Fest and Jazz Fest.

Katy also sings with Steve Howell & the Mighty Men out of the Ark-La-Tex area,  who perform country blues and early jazz standards. This musical friendship was first established in 2002. (Both Dave and Katy sing on their album Good As I Been to You.) These are the musicians behind the new release, I Dream of Water.

In 2018, Dave and Katy took jobs based in Memphis, and are currently living between Memphis and New Orleans. They wrote this album with perspective and reflection on their experiences in their beloved Louisiana.

I Dream of Water is their first official release together.

Join Katy Hobgood Ray & the Confetti Park Players, Confetti Kids, the Hubbell Library, and the NOLA Pyrate Society for a day of storytelling...

Katy Hobgood Ray will perform at French Quarter Fest Kids Stage.  Join us at the biggest free festival of music in the USA! More

I discovered great joy in writing songs for the kids in my New Orleans neighborhood to sing. Kids music is playful, observant, silly, fun! I also find inspiration in the clever lyrics and melodies of the Great American Songbook.

I'm host and producer of the Confetti Park radio show and podcast, which features children’s music and stories from Louisiana and the Mississippi Delta. Syndicated on the Pacifica Radio Network.

I have a master's degree in musicology from Tulane University, with a specialization in early New Orleans jazz. My thesis was on my great-great uncle, pioneering jazz guitarist Snoozer Quinn.

Lyric video for "Washed Away" performed by Katy Hobgood Ray, from the album I Dream of Water.

Watch Out for the Pirates

Katy collaborates with the Confetti Park Players children's chorus and the NOLA Pyrate Society on this piratical tune.